>I love Formula 1 racing. It is my absolute favourite spectator sport and the success that my team McLaren are having this year is great to watch.

I think that the progress of Lewis Hamilton has been nothing short of phenomenal, but we mustn’t forget that he has been a McLaren “employee / driver” since he was 11 years old.

Despite the brilliance of him and this year’s McLaren, I can’t believe how badly ITV are ruining his success for me. They spend the entire broadcast moaning orgasmically about everything he has ever done, is doing or ever will do. The Lewis Hamilton Love Fest this week is from Silverstone so this is his “home” GP. The queue to blow him starts somewhere around Milton Keynes and is composed entirely of ITV on-air “talent”.

Poor old Jense and his old man John. Once the darling of ITV and the true love of James Allen and Jim Rosenthal, they now spend every race weekend in this clapped out caravan, which ironically, even on bricks is faster than this year’s Honda, 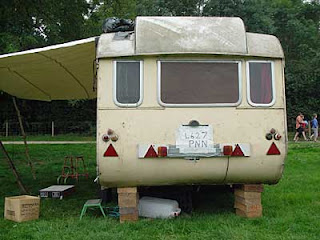 Thankfully the old slapper Louise Goodman is still squeezing her thighs together every time she shoves a microphone in Jenson’s face. I think she secretly wants to come over to Jenson’s caravan and warm his beans for him but mustn’t deviate from the ITV LHLF regulations.