>I just read on The Age that Paris Hilton was paid A$5 Mil. to fly down to Australia and launch a new beer called Bondi Blonde. John Singleton should be boiled in oil for that idea – trouble is, he probably wouldn’t feel it!

Further to this, we (I say we, but it was they since I don’t live there anymore) also had to endure the presence of another walking STD – Tara Reid – who was shipped in to add some “glamour” to a horse racing carnival in Brisbane???

It’s no secret that I find these two creatures repugnant. What troubles me most is that as a society, we have become so obsessed by the cult of celebrity that we feel that we aren’t complete until we throw a self-absorbed slut or two into the mix to “glam up” the proceedings.* 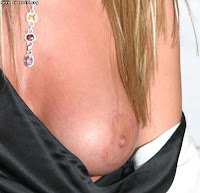 I don’t want to get started on this because it just makes me spiral everytime I think about it but I can’t help myself. Is it the “celebrities” I hate or society for lauding such dubious achievements of being born to wealthy parents whilst giving the worst blow job in the history of oral sex and being so bombed on the red carpet that your Franken-nipple showed and you didn’t even know it?

I read on Wikipedia that Paris Hilton was going to be in the 2007 Guiness Book of records as the World’s Most Overrated Celebrity – someone might be onto something here.

I have to stop now or I am going to have an aneurism.

*Don’t get me wrong. Self-absorbed sluts are the perfect gift for a loved one or friend.