>All the rage in our little circle of copycats today.

As always, Dilbert gets it absolutely correct. Funnily enough though, I never thought of myself as Pointy Haired Boss but….

>Stream of consciousness today…I just got back late last night from a two-day trip to Germany with corresponding daily meetings in German. You’d think that living in a german-speaking country, that there’d be no problem. Well you’d be wrong. I don’t have to speak German all day long. I tend to speak loads of English so sitting in meetings that go for hours on end in German is actually hard work. You cannot afford to lose consciousness even for a second.

Which is of course made all the worse when you spent your 15th wedding anniversary on the toilet in a hotel in Bremen!!! I must have taken a bait somewhere or picked up a stomach bug because I felt like hell. Thankfully the Hilton in Bremen provides lots of toilet paper. Needless to say, the next day meeting was even worse when you consider that I had a toilet-shaped impression on my backside. For lunch they served some fancy sandwiches which were pleasant enough but I wisely avoided the Beef Tartar canape which looked to my delicate stomach like raw mince on toast – blechhhh.

You may have noticed that I mentioned that it was my 15th wedding anniversary on Monday. The little lady is an absolute doll and I couldn’t ever have found anyone better. Here’s to at least 115 more! >I was perusing the newspaper this morning from my beloved Melbourne and came across this story that frankly, beggars belief!

Is there really anyone out there who believes now (or has ever) that the emails you get from people purporting to be the head of an African bank or aide to an exiled / dead president of an African nation yet come from Yahoo and Hotmail accounts are real?

If it was real, why wouldn’t they just go to the officials and offer them the 10% of 75 million gajillion US dollars?

Check out this site for a good laugh at the expense of the scammers. They suck the scammers into believing that they will comply with the request for money and make the scammers do all sorts of stupid and humiliating things. normally posing for photographs with silly signs and stuff. Take this for example: 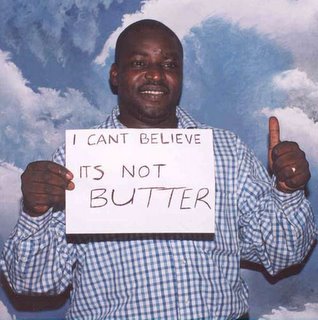 We all know that it’s a scam, but what troubles me is that there are some of my fellow countrymen (Queenslanders mostly – which sort of explains it) who have been fleeced for up to AUD 2.2 million!!!! In total, police estimate AUD 7 million has gone to these scams from Queensland “victims”. I say “victims” because “dickheads” would be too inflammatory – oops, I said it. In case anyone needs to be reminded, if it seems too good to be true, it probably is. Still, if you’re a greedy bastard, you’ll soon fall over yourself. As they say, a fool and his money are soon parted.

Now if you would just leave your account details in the comment box, I will share 20% (twice the going rate) of a Swiss cheese baron’s estate that I can get access to, if I could just get a couple of thousand Swiss Francs with which to bribe the caretaker at the cheese factory . Email me soonest your accordance such that we can do a profitable business. I would never try to cheat you – honest!!

>My beloved Nana used to crochet littel baby clothes, covers for coathangers and stuff like that, just like everyone’s grandmother – no real news here.

However, this amazing lady does crocheting too and her’s is out of this world. Check out these examples of crocheting excellence. A crocodile ate my baby! Can you beat a pink crocheted gimp mask?

Crocheting is back baby!!

Thanks to BoingBoing for putting me onto this one too.

The Foo Fighters concert was absolutely brilliant. The lovely rock goddess Ms. Mac and I spent the entire concert right down the front, centre stage in the midst of the mosh. Needless to say we had a ball!!

And Dave even played the drums while Taylor sang a song. That fucking rocked too – love to see Dave on the drums. >Big news – an admission of guilt on my behalf.

Regular readers will be aware that the adult Macs are going to see the Foo Fighters this month. There has been a lot of build up to this concert and Ms. Mac and I are heavily invested in the gig. It is something that we have wanted to do for years and years. Normally when the tickets go on sale in Australia, they are sold out in minutes so it was a big deal for me to be able to waltz into Ticket Corner and nonchalantly pick up a couple of tickets without any queuing, sleeping bags or thermoses of braised steak and veggies!

For about a month now, I have been convinced that the concert is the day after pay day. So much so that I have also sold Ms. Mac on the idea and we have been planning our entire week around going to Foo Fighters on Thursday 26th. Being a cautious type (and having screwed us up on dates before*), Ms. Mac asked me last night “are you absolutely sure that the concert is on the 26th???”

I replied “of course I’m sure – the day AFTER payday.”
“Yeah well you better check! I’ll kill you if there’s a mix-up!!!”

So last night I suddenly remembered that she had told me to check the dates and opened the top drawer where the tickets have been hibernating and took a peek. Lucky I did too – the concert is tomorrow, not Thursday!!!

Can you even begin to imagine what would have happened if I had not checked and we turned up on Thursday only to find the place deserted and our tickets reduced to the status of the world’s most expensive bookmarks?

The agony doesn’t bear thinking about.

*Once, we were scheduled to travel on the Superfast ferry from Zeebrugge in Belgium to Rosyth, Scotland. This overnight trip is a fun way to cross from Europe to the UK and we were really looking forward to it. Zeebrugge is about 10+ hours drive from Zürich so we packed up the car, the kids and our troubles and set off in the dead of night for Belgium. We turned up at the ferry port expecting the usual tailback of cars waiting to board the ferry and were pleasantly surprised to see that we were the first (and only) car there. I went up to the lady sitting in the office and asked what time the gates would be opening for boarding. To which she replied that the ferry didn’t sail on Sundays in winter – we were a whole day early! We got a hotel room and stayed the night, had chinky for tea and the boys loved it. So much so that they asked if Mum could always screw up the dates in future!

This evening, whilst trying to further my own internet wheelings and dealings, Patrick asked me if I could help him with one of those crappy word searches that they give to children in schools when they (the teachers) have run out of inspiration or interest.

Tonight we were searching for german verbs. Not such a hard task because the infinitive form of all german verbs ends in ‘en’. For some reason, I managed to find about 10 words after the resident “german expert” found all that he could. I think that if I could refrain from punching his teacher (Herr Knobend), I might be a good 6. Klässler (sixth grader).

Who knew? Which class would you go back to and warum (why)? 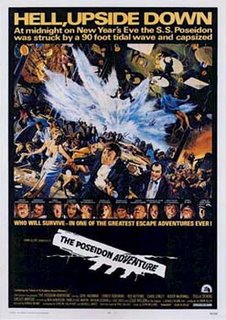 The Poseidon Adventure!!!!!!! I don’t know about you but I am on the lookout for something, anything at tonight to watch on the tellybox. It would appear that the people who sell us our telly programming don’t actually want us to enjoy our Saturday evening at home.

Unfortunately, the residents of Chateau Mac are not really disposed to the typical Saturday funtime activities that may be on offer to adults in 2006. (S0me of them are not actually adults – but don’t tell Patrick). According to a friend of mine and to a apply his comment to my own life, “it’s not all parties and poppers!” Damn straight it isn’t!

Anyway, we’ve decided to introduce the boys to the epic that is an Irwin Allen disaster flick. The thing is that they have already started to watch the Airplane movies so they’ve seen the farcical side of this genre, now we need to show them where it all came from in the first place.

Think of us when you’re dropping your first ‘E’ tonight or stumbling home, evening’s conquest in tow….some of us are watching The Poseidon Adventure.

>A Happy and healthy New Year to both of my readers. I am as pissed as a newt, so this message comes with no guyarantee of spelling or typigraphical excellence. Try saying that when you’rte pisse dand your fingers are the sixe of sausages.